With your time machine safely concealed in an alley under an old paint-splattered tarp, you sit back, draw in a pungent lungful of fishy air, and take a moment to soak it all in. At first, nothing stands out. All you see is the daily bustle of life on the harbor. As you sit back on your park bench and observe (trying your best to look inconspicuous), nothing suggests that a crucial moment in US history is unfolding around you. But eventually, your eyes settle on a small army of dockworkers, laboring under the hot evening sun. You can see the exhaustion as these men haul the heavy cargo dockside, their quaintly outmoded cussing painting the air. You feel the heavy thud reverberate through the ground as each piece finds its resting place after traveling an ocean to get here.

Crates. 214 in total, each carefully packed with a gargantuan jigsaw puzzle of copper and iron. And somewhere in one of those boxes lurks an enormous instruction manual.

The enigmatic Lady Liberty may be an iconic symbol of one big idea. But she’s also the culmination of many thousands of small and practical ideas.

Her arrival in 1885 was a triumph of logistics.

The statue was broken down into 350 modular statue pieces. Copper artisans had punched holes along every connecting edge — precise riveting points for the US construction team. Each connection point was numbered and referenced in an instruction manual the size of a phone book (a quaint artifact you learned about in an earlier time-traveling adventure). Those 350 pieces were then built into supporting wooden frames. The framework was constructed to protect each piece from jostling, as well as to prevent the roughly 450,000 pounds of copper from warping during the long ocean voyage.

The audacity, ambition, and gritty determination that went into making this gift a reality is hard, even now, to fathom. Nothing even close to this had been attempted before.

It took the French construction and shipping team nine years to build, package and transport the Statue of Liberty. Every step of that near decade-long undertaking posed unexpected challenges, with skilled and experienced people digging deep into their imagination and ingenuity to make it happen. While the Statue of Liberty’s arrival in the US was a grand gesture, the feat of getting it from Paris to New York Harbor was a near-endless succession of small, difficult, and incremental decisions.

We may be taking liberties to segue at this point to logistics, but we’ve already invented a fictitious time machine and there isn’t much to lose at this point. So we’re just going to come out and say it: shipping big stuff is hard.

Flash forward to the present day

With your time machine safely back at the lab for further testing, you’ve been cordially invited to IL2000 HQ to discuss your findings. We can’t claim to have seen the amazing things you witnessed on your perilous temporal journey. Nor, to our best recollection, have we overhauled any supply chains involving 151-foot tall copper colossuses (colossi?). But we have helped ship a lot of big, fragile, and expensive stuff, and we’ve seen firsthand that moving big things over long distances poses unique and peculiarly difficult challenges.

A prime example has been our work with office moveable partitions and furniture systems manufacturers. Here are just some of the materials and logistics challenges of schlepping an enormous modular glass wall from A to B:

OK, OK. Drawing a direct comparison between the Green Goddess Saint Liberty and an oversized office partition is problematic at a symbolic level. But at a practical level, we’re staring right down the barrel of some striking parallels.

To move a big item safely, you have to get the small things right. A few examples:

A bit like the Statue of Liberty arriving in 214 neatly labeled boxes, moving big and difficult materials so often boils down to careful and intricate planning coupled with constant minute course corrections. 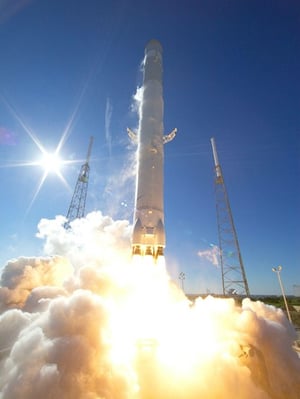 You step out of your newly upgraded time machine just in time (ironically enough). You’re here to witness the SpaceX Starship’s bright plume of flame as it roars heavenward, surging to rip through the flimsy bubble of our planet’s gravity well. Inside are the hundred or so brave scientists and engineers who will set foot on Mars to establish our first off-planet human colony.
And following that giant leap?

Hot on its heels will be logistics – an endless progression of small, difficult, and incremental steps, like thousands of holes painstakingly bored into 350 sheets of fragile copper sheeting.

(But more about Mars in a future blog post!)

Are big strides a part of your company’s past, present, and future? We can help.

For two decades, we’ve worked with clients to shift heaven, earth and extremely heavy stuff somewhere in between. Click here to schedule a no-obligation consultation, and let us show you the first steps you can take to build a lean, reliable supply chain.

Coffee, logistics, and the importance of big steel boxes.

Four in five people reading this article will have a steaming cup of coffee within easy reach. Now...

In just a few years, packaging will likely be unrecognizable from what it is today. The industry...