The changing tide of port congestion and supply chains 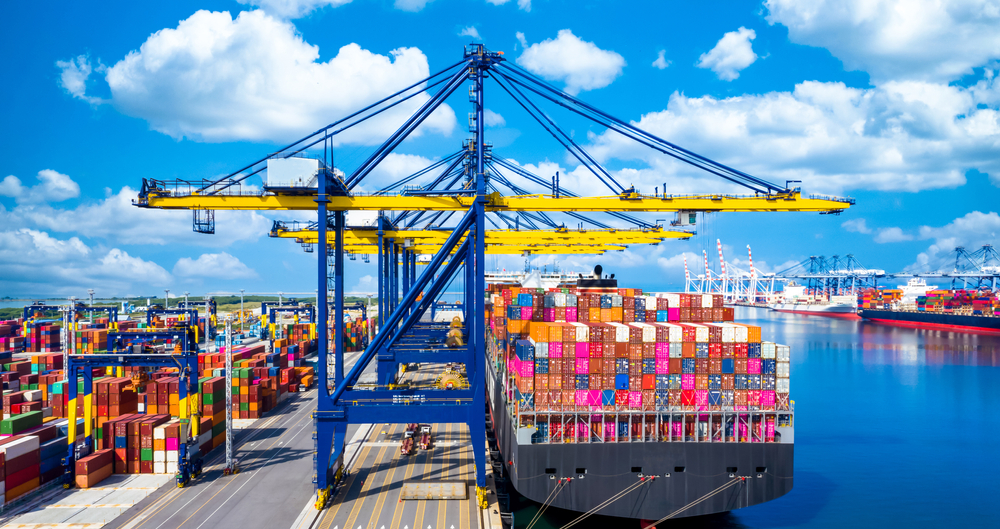 The question on everyone’s mind is, when will supply chains return to normal? Some critics argue it won’t, that “normal” is gone. The world has permanently changed, and we will continue seeing port congestion and supply chain issues for decades.

But if we take a bird’s-eye view for a moment and consider that seaports and trade have been around since the dawn of ancient civilization, we see that change and adaptation are intrinsically human. How you plan your international shipping and safeguard your supply chain may change. Your businesses may shift suppliers and physical locations. Still, world production and logistics will ride out this storm, just as they have fluctuated with the tide of change for thousands of years.

A look back before we look forward

Four thousand five hundred years ago, Wadi al-Jarf, the world’s first artificial harbor, sat at the mouth of Wadi Araba, a major communication line crossing the Eastern Desert between the Nile Valley and the Red Sea. The harbor flourished in the golden era of Egypt’s Old Kingdom when peace and prosperity reigned and trade with other countries flourished.

The discovery of ancient jars at Wadi al-Jarf originating from other sites around the Red Sea proves that trade existed, while numerous limestone anchors tell the tale of voyages exporting copper and stone from the Sinai Peninsula to the Nile Valley.

The large blocks of the 150-meter-long mole (jetty) are still visible at low tide today, the limestone slabs inscribed with the name of King Khufu, the builder of the Great Pyramid at Giza. “Ancient inland harbors are known on riversides, but the jetty of Wadi el-Jarf predates by more than 1,000 years any other known structure of this kind,” says Pierre Tallet, a University of Paris-Sorbonne Egyptologist.

An alamat, or heaped stones used as a navigational landmark, still stands as a beacon.

The photo, courtesy of the Archaeological Institute of America, is of a 60 by 30-meter building with storage galleries carved into limestone outcrops.

Ten exceptionally well-preserved papyri are the oldest ever found in Egypt, including a diary written by Merrer, an Old Kingdom official involved in building the Great Pyramid. His hieroglyphic text documents the daily activities of his crew, including transportation of white limestone blocks from the Tura quarries to Giza by boat.

It’s amazing to think that over four millennia ago, the ancient world was vibrant with trade and transportation. And right at the heart of that vigorous exchange of materials and cultures, logistics was the organizational lubricant that kept the machine of civilization running.

Today, these sites are tourist attractions. But the trade and commerce that happened here didn’t simply vanish into history. Economics, trade and logistics gradually evolved across the millennia to where we are today.

Change in the modern world

Ocean freight accounts for 90 percent of the world’s trade. Today's ports are engineering feats of mechanization and automation, providing safe and efficient services to exporters and importers without the masses of laborers required in bygone years. They service the global merchant fleet numbering over 5500 ships and handle millions of TEUs of cargo volume each year. (A TEU is a standard unit for counting containers of various capacities and describing the capacities of container ships or terminals; One 20 Foot ISO container equals 1 TEU.)

Just as they did in Ancient Egypt, ports shape local industry. Businesses, regional distribution centers, warehouse and freight-forwarders, canneries and other processing facilities all pop up near ports, eager to take advantage of lower transportation costs and narrow their margins of uncertainty.

Fifteen of the top twenty ports in the world are located in Asia. The largest of these multimodal distribution hubs is the Port of Shanghai. 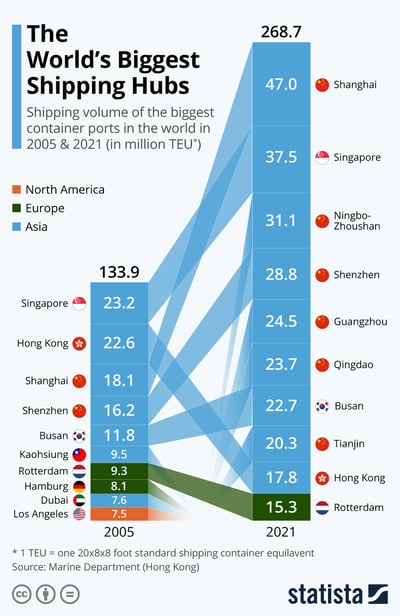 Let’s look at how one of the world’s busiest ports is changing today. 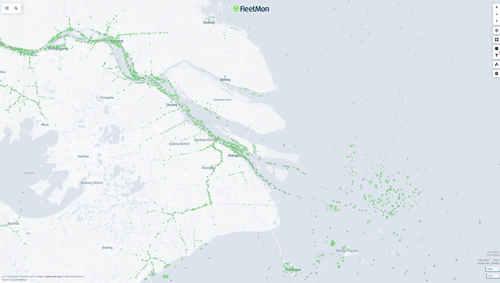 The Port of Shanghai has been the world’s busiest port since 2010. And the current ship jam spells trouble for the world’s supply chains. (Photo: source Fleetmon showing container ships in and around Shanghai Port.)

Experts estimate that over 260,000 TEUs of export cargo were not shipped from Shanghai since the shutdown [IL2000 International Monthly Market Update: June 2022]. This number is equivalent to roughly 13 mega ships holding 20,000 TEUs each.

Renewed quarantine restrictions when supply chains were still rallying from vast Covid disruption have slowed recovery.
With the closure of several major highways impacting trucks carrying exports to city ports, shippers are diverting to other smaller ports along the Yangtze River, like Ningbo. As a result, port congestion is spreading.

But Shanghai’s impact goes deeper than just shipping container movement. With residents confined to their homes and the region's zero Covid restrictions, the impact on worldwide manufacturing plants and global supply chains is profound. For manufacturers from Tesla, Merck, Siemens and Bosch to Apple, Sony and Volkswagen, restrictions have impacted the supply of materials needed to make their products.

But some trends are showing promise. Warehouses have started to open partially in Shanghai. Blank sailings out of China's base ports have begun to drop. This means fewer ocean line service operators are canceling a call or skipping a particular port, region, or entire leg on their scheduled route.

A look closer to home

The West Coast ports, which have been monopolizing the headlines with their long delays and heavy congestion, are slowly processing containers. While ships are bypassing the congested LA and Long Beach ports and heading to Oakland, logistics managers are trying to move containers through the East Coast and Gulf Coast. As a result, congestion and delays are spreading, and the East Coast and Gulf Coast are stealing the headlines.

The Georgia Ports reached an all-time record in May as strong consumer demand and retail imports lifted volumes higher while vessels continued to divert from West Coast ports. With warehouses 99 percent full, the Port of Savannah is utilizing pop-container storage. “Strong consumer demand continues to drive higher volumes at the Port of Savannah,” Griff Lynch, Executive Director at Georgia Port Authorities, said in a release. “The infrastructure improvements and pop-up yards approved by the GPA board have enabled our operations to maintain the flow of cargo across our terminal, despite unprecedented container volumes passing through the port.”

The Port of Virginia saw the highest volume in the port’s history in May.

The truckload ratio at major ports is high, topping 8:1 in Savanna and Charleston.

As we move into the next cycle, the next mini-era if you will, high seasonal demand peaks in July and back-to-school in September/October are quickly approaching. With restrictions in materials needed for production, sluggish supply chains and a backlog of shipments, things may not go as smoothly as hoped this summer.

Factors from the lingering pandemic, renewed lockdowns, and the war in Ukraine have severely reduced capacity, restricted supply chain procurement and led to port congestion. Shipments are being canceled, postponed and rerouted.

But just like we’ve been doing in logistics for thousands of years, we will adapt. Ships are rerouting to unload in ports previously overlooked. Truckers carrying exports are avoiding congested ports and looking for alternatives. Companies, especially smaller businesses, must adjust to the changing environment or face a threat to their survival.

We have reason to be cautiously optimistic.

Now companies are emphasizing resiliency and having a clear view of all the suppliers in the chain. Product quality and availability are paramount. They’re diversifying their supplier base to avoid reliance on China and turning to locations closer to home. Walmart, Boeing and Ford are prime examples. They may not be writing out the details on ancient papyrus, but they are drafting a plan.

The world is making efforts to anticipate future crises. The US and EU plan to develop an early warning system to identify future global disruptions to semiconductor supply chains. It’s a start.

As a result, future supply chains will be robust.

We are learning. Supply chains are evolving. Logistics is adapting.

Darwin would be proud.

In logistics as in life, change is the only constant. Get in touch to learn how we can optimize and future-proof your supply chain.

Has the Food and Beverage Industry bitten off more than it can chew?

“Every society is three meals away from chaos.” - Lenin, Vladimir

How to resolve freight charge disputes without going nuclear

Shipping goods from point A to point B is critical for managing supply chains, meeting market...

Private equity firms look for an annual profit of between 20% and 25%. They estimate that one in...