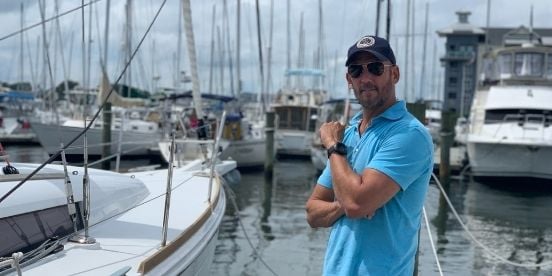 What moves a 13-year-old boy to wake up at 3 a.m., ride his bike to a pier in Lake Michigan, and spend all day casting a fishing rod in hopes of connecting with a big trout or salmon?

Kraig Cesar had all those characteristics as a teenager growing up in the 1970s in Sheboygan, Wisconsin. And those same qualities have pushed him to success in many arenas, from being an elite track athlete to being an award-winning sales representative to building IL2000, the company he founded in 1999, into a robust freight and logistics company with clients around the world.

“A lot of people think business success is often due to luck,” Cesar says. “I believe the harder you work, the luckier you get.”

Catching Lake Michigan’s trophy trout and salmon required being at the lake at dawn. To get his preferred fishing spot on the city pier, Cesar would rise long before first light, load up a home-built bike trailer with fishing gear, breakfast and lunch, and ride to the lake. That effort paid off with many nice catches, including a 12-pound brown trout that earned him a 3rd place prize in a big fishing derby. He had led the tournament for a few days, and just missed out on the chance to win a car.

“Instead, I won a video recorder,” he said, laughing.

Those daily rides to and from the lake may have had another benefit. An average runner as a young middle schooler, by the time Cesar was in high school he had become speedy. His senior year he won the state title in the 800 meters. School records he set in the 800 and mile remain on his high school’s Wall of Fame.

Cesar had dreamed of competing for the University of Wisconsin, but by the time the school’s coaches took notice he had already accepted a scholarship to Mississippi State University. There, Cesar excelled on the track, twice winning the SEC championship in the indoor 800 meters.

Those years in Starkville also provided his first taste of entrepreneurship.

“It was too far to go home for Thanksgiving, so every year I’d rent a steam cleaner and clean carpets in my apartment complex during that long weekend when everyone else was gone,” he said. “My friends always said, ‘You’re going to own your own business one day.’”

After graduating in the spring of 1988 with a degree in marketing, Cesar made his first trip to the Olympic trials. Still young, he didn’t do very well against the nation’s best. But he knew he could become faster and committed to running with an eye on the 1992 trials.

After the trials, Cesar accepted an invitation to move to Norfolk, Virginia, to serve as a graduate assistant coach for the Old Dominion University track and cross country teams. Arriving at the school, he met with the athletic director to discuss the position.

“She said, ‘Sorry but the money fell through so we can’t hire you,’” he recalled. “But she said she had a lead on a job and handed me a number.”

Cesar made the call — to a Dunkin’ Donuts shop. 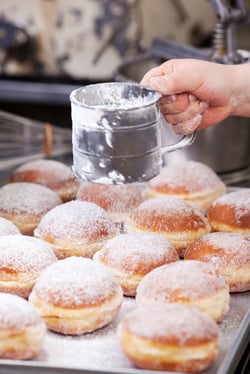 “It was tough. I was on my feet all day and kept getting injured.”

His next job was working at a mall food kiosk that specialized in salads.

“That was my introduction to cold-calling,” he said, smiling. “The owner would have me call businesses in the area to see if they were interested in us delivering salads for lunch.

He stuck with it, in part because he so appreciated the owner’s incredible work ethic.

Still, it was tough to balance that job with training, so Cesar eventually started working at a running specialty store.

“We didn’t just sell shoes,” he said. “We worked with every customer to assess their needs so we could set them up for success.”

After the 1992 Olympic trials, Cesar knew it was time for the next chapter. Over the next few years, he took a series of sales positions, including for a newspaper company, a direct mail advertising company and, eventually, a company specializing in freight and logistics.

All of the jobs provided him with training, experience, and an appreciation for the impact of consultative sales. He loved the freight and logistics job but was frustrated that the company owners didn’t seem interested in growing the business.

“They were successful and just didn’t want to get any bigger,” Cesar said.

He eventually left for ADP, the worldwide payroll and services company. The company’s sales approach, which focuses on detailed analyses of clients’ needs, was inspiring.

“They were the best of the best,” he said of his counterparts on the sales staff. “The training and experience were excellent.”

And that formed the foundation for his approach when he left ADP in 1999 and founded IL2000.

Working solo out of a home office, Cesar went back to the world of cold-calling. It wasn’t easy. He remembers talking to one prospect who was incredulous at Cesar’s audacity of starting a business.

“He said, ‘Let me get this straight, you’ve got no money and no clients and you want me to sign up with you?” Cesar remembered. “I said, ‘Yes.’”

The man signed up. Even though he works at a different company now, that company remains an IL2000 client.

Cesar would sometimes start work at 3 a.m. and not finish until late at night. The long hours and persistence paid off. The client list grew. So did the company.

“We have an incredible team in place,” Cesar says. “It’s due to them that we continue to have success.”

Today, IL2000 has more than 60 full-time employees, with a home office on the Virginia Beach waterfront and a satellite office in Austin, Texas. Company leaders are continually working on new approaches and technologies to help improve client services while also striving to provide an exciting and satisfying work environment.

“From the beginning, my philosophy has been to take care of clients, take care of employees and take care of profits,” Cesar says. “If you do the first two really well, the third one takes care of itself.”

“Disruptive technologies, product innovation, and digitization will transform the building-products...

With your time machine safely concealed in...

Private equity firms look for an annual profit of between 20% and 25%. They estimate that one in...